Hello Friends and thanks for reading today's blog.  First let me remind you that we have lots of classes coming up so be sure to check those out here.

Have you ever bought a stamp or a die and when you looked at it later thought "Why in the world did I buy that stamp or die???"  Well it happens to all of us including me -- except I buy 3 or 4 for the store!  That's how I felt when I unpacked the Poppystamps "Magnificent Merry" die -- I mean the name alone is a little off-putting!  But, I challenged myself to work with it and the more I did, the more I liked it.  In fact, it's a little addictive because once you cut "Merry" out of white and inlay it on red cardstock, you want to inlay the red on white cardstock, and so on and so on.  And there are many dies and stamps that will work in the space under the "Merry."  Pretty soon you have a lot of Christmas cards that are fun, impressive and very versatile.  See what you think. The new "Hooks and Caps" die will work with any ornament die -- I cut it out of gold mirrorcard for some shimmer! 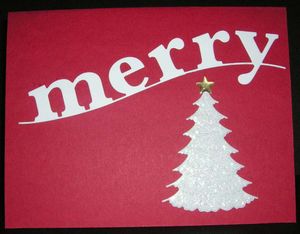 I cut the Spruce tree out of white glitter cardstock. 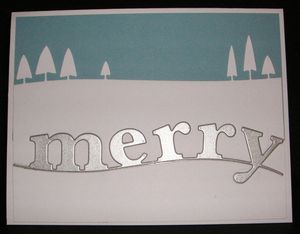 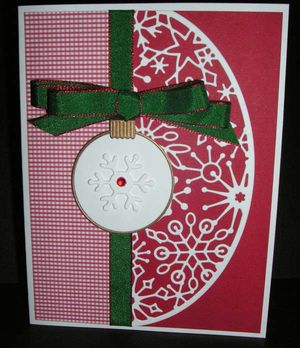 Here I used the same Globe Ornament that's shown in the first card above.  The die cuts a circle and a rim shown here in gold metallic cardstock.  The Snowflake Arch is bound to be very popular because it is gorgeous.  You can match it up with the coordinating solid arch die too for a background. 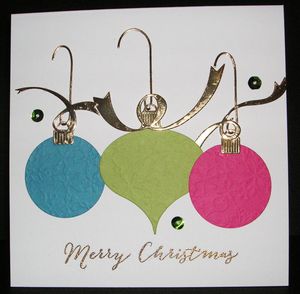 I cut the Globe ornaments from pink and blue and the traditional ornament from green then embossed all 3 using the Snowflake Lace stencil.  The hooks and caps and curcled ribbons are all cut from gold mirrorcard. 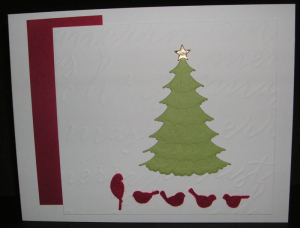 The birds are cut from red wool felt for a little added texture.

Stop in soon and see these samples and many, many more up close!

The comments to this entry are closed.